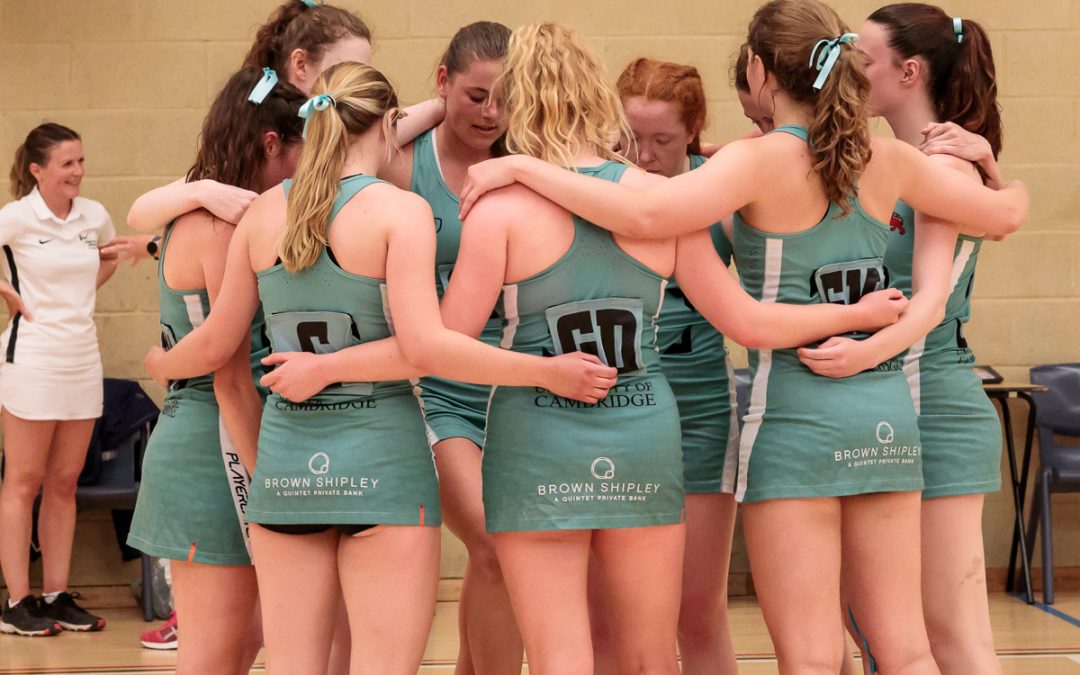 The results were not what we’d hoped for, but Varsity 2021 was an amazing day filled with great netball, and a brilliant way to end the year! We’re very thankful for the opportunity to play this match in such a disrupted year, and a huge thanks must go to the CULNC Executive Committee, Ciara, Rosie and Jemima, for all their hard work in making Varsity possible!

The run-up to the Jays’ (2nd team) Varsity Match was less than smooth, with two promising freshers unfortunately being lost to contact tracing with less than a week to go. However, things were beginning to click in the final training sessions and the Jays went into the match at The Ley’s School feeling confident and enthusiastic.

O*ford won the first centre pass to start the game, but a great interception from Laura Vass meant that the first goal went to the Light Blues. The Jays’ strong defence continued to put pressure on the Dark Blues, and the Jays enjoyed a fast run of goals. Accurate and quick feeds into the shooters from Millie Quayle on the circle edge and another interception by Indie Foster in the O*ford attacking third helped the Jays have a strong first quarter which finished with the hosts leading 9-4.

The beginning of the second quarter was very back and forth between the two sides, until a string of goals meant that O*ford managed to get within one of the Jays. The match became increasingly more heated, and the O*ford supporters who were sat on the sidelines were reprimanded by the umpire for intimidating the Cambridge shooters. After this, momentum swung once more in the favour of the Jays, who ended the first half 17-14 up despite a last second goal on the buzzer by the visitors.

The third quarter started well for the Jays, with strong defensive pressure in the mid-court helping Sophie Tamblyn steal the ball in a well-read interception. Despite the Jays’ strong defence and tips from Libby Bryant, O*ford pulled it back to level the score at 19-19, intercepting the ball off the centre pass and in the Jays’ shooting circle. The score stayed even and went with the centre passes until Libby Bryant carried out a great interception in the circle to win the ball for the Jays, and the Jays finished the third quarter with a narrow lead of 25-23.

Despite Laura Vass getting an overhead tip on O*ford’s first centre pass, the Dark Blues started off the final quarter looking strong and the Jays made a few mistakes in getting the ball down to their shooters. The pressure was on, but the Jays’ shooters stepped up to the plate with Anna van Velsen nailing her long-distance shots and Sophie Tamblyn, ex-captain of CUWLC, holding her nerve to work with the rest of the attack to create some brilliant attacking plays.

With just three minutes to go, there was just one goal in it and the tension ratcheted up a further notch. O*ford stepped up the pressure in the final few minutes, and the Jays lost possession with just 50 seconds to go. O*ford capitalised well to score a goal, taking the score to 34-33. With 25 seconds to go, it was the Jays’ centre pass. Unfortunately for the Jays, their centre pass went off the sideline and O*ford gained possession and scored at the last possible moment to equalise the score at 34-34.

After a discussion between the umpires and the club captains and presidents, it was decided that there would be no extra time due to COVID restrictions on the time players are allowed to play for. Despite initial disappointment at a draw after having led the entire match, the captain Lucy Patchett had words of encouragement and reminded the Jays that they’d put up an incredible fight in what was their only competitive match of the season. The umpires chose the Jays’ Millie Quayle as the Player of the Match.

The Blues team had a number of established combinations, with the shooting duo notably including CULNC’s captain Ciara Agnew, who won Player of the Match in the two previous varsity matches which she had played in. The Blues had confidence from playing well in training, but, like the Jays, this was their first competitive match of the season and they knew from previous years that the O*ford Blues team was very strong.

Both teams had a shaky start in the first quarter, with mistakes dominating play, ensuring it was a while before the first goal of the game arrived, coming on the O*ford side. Despite a great tip from Thea Krumins to turn the ball over and consistently strong defensive pressure from Thea, Fenna Agnew and Clare Pearson, O*ford’s attack was efficient and effective and the Dark Blues quickly scored five goals.

Caitlin Reilly, who was jostling hard with England international Zara Everitt, finally put a stop to O*ford’s string of goals by netting Cambridge’s first one to take the score to 5-1. Strong defensive pressure from Cambridge denied an O*ford goal on the buzzer, and the first quarter finished with the Dark Blues leading 9-2.

A few changes were made for the second quarter, with Amber Frobisher (playing in her third and final Blues varsity) coming on as centre and Fenna Agnew moving to WD. The Light Blues started this quarter much better than the previous, scoring two goals in a row with Ciara Agnew nailing her shots from far out and getting herself onto the scoreboard. The Light Blues initially denied O*ford the runs of goals they had enjoyed in the first quarter, narrowing the lead to 10-5.

However, the Dark Blues’ defensive combination proved extremely strong and, despite the Cambridge scoring two goals at the end of the quarter,  the first half finished with O*ford leading 20-9.

More changes were made for the third quarter, with fresher Clodagh Bottomley making her varsity debut and coming on at GS. Clodagh’s strong holds and confident shots made an instant impact as she slotted in well with Caitlin Reilly who continued at GA. Cambridge’s defensive pressure continued to force mistakes as continuous pressure and tips from Thea Krumins and Fenna Agnew created opportunities for the Light Blues. In this quarter Cambridge were much better at capitalising on and converting their turnovers, losing this quarter just 10-9 to an O*ford side that was clearly struggling to interrupt Cambridge’s flow as successfully as they had done in the first half. The third quarter finished with the visitors leading 30-18.

Changes were made going into the final quarter, with Clodagh Bottomley moving out to GA, captain Ciara Agnew coming back on as goal shooter, and Amber Frobisher coming on as centre. Cambridge’s defensive pressure continued with Thea Krumins making a great interception in the defensive circle which Ciara Agnew converted at the other end.

The game grew more heated as the end neared, and players on both teams were cautioned for repeated infringements. However, O*ford proved too strong for Cambridge and pulled away again, winning this final quarter 11-5 to win the Blues match 41-23. Despite the Light Blues’ best efforts, the O*ford team were a slick and commanding presence and well and truly deserved the win. The umpires chose O*ford’s Zara Everitt as the Player of the Match.