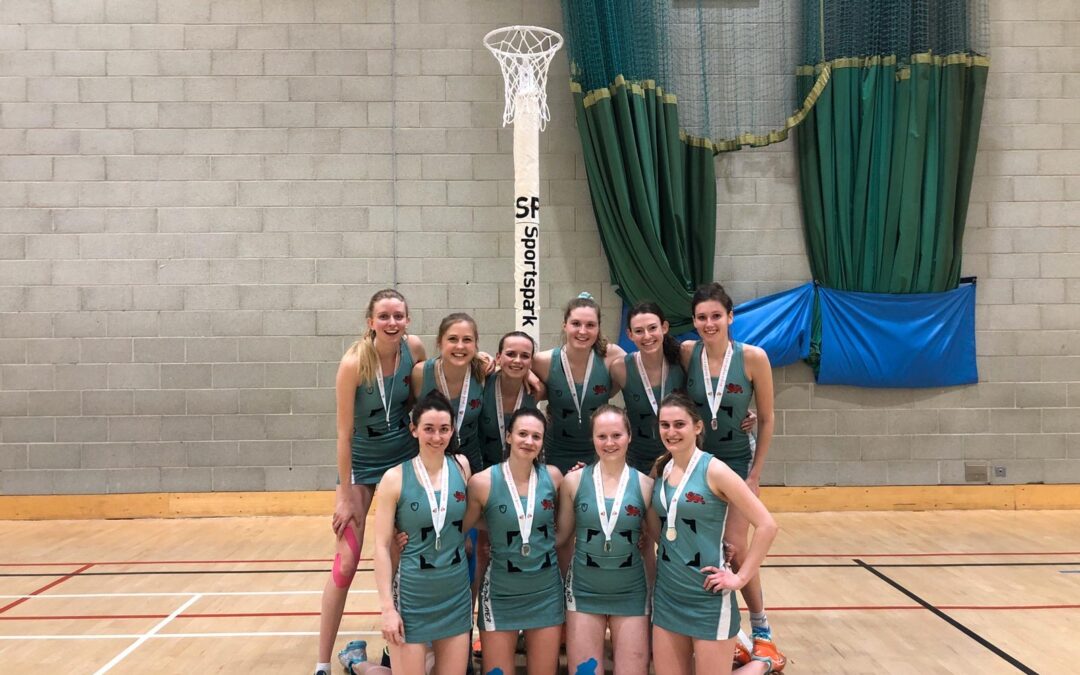 The Blues have had a highly successful and incredibly fun season. It took the Blues a few matches for things to click into place, but once they did the Blues just became better and better. The season began with strong wins over Birmingham 4s and a tough Loughborough 4s in the league, which we followed up by beating the same Loughborough team the next week in first game of the Cup. Then we came up against Warwick 1s for the first time, narrowly losing by 6 goals. The rest of Michaelmas Term was marked by extremes, with a nail-biting draw against Nottingham 3s in the league yet very comfortable wins over Bedfordshire 1s in the league and Aston 1s in the Cup. After Christmas the Blues returned and got straight back into it, beating Bedfordshire 1s 86-18 in a dominant performance and holding out to ensure a second tight draw against Birmingham 4s. As we neared the business end of the season the matches became increasingly tightly contested but success continued for the Blues with wins over Loughborough 4s in the league and over Loughborough 5s in the Cup, with the Blues overcoming some frustrating umpiring at both of these matches which took place in Loughborough.

Then came our second game against Warwick 1s, the team top of the league, on the 19th February. At this point, we were one and half weeks and two matches away from Varsity, so the pressure was on for us to perfect our play and perform as well as possible. With Warwick being the only team we had lost to so far, we were all extremely determined not to lose again yet we were once more unable to contain Warwick and their 6 foot 4+ goal shooter, losing by 7 goals after a tough and full on four quarters. Spurred on by what was now two defeats to Warwick in the league, the Blues embraced the challenge of the next week with the focused and singular aim of beating Warwick, as we were now about to play them exactly a week later on the 26th February in the semi-finals of the Cup.

Game day arrived and the excitement was building, with the Blues driven on more than ever by some premature overconfidence from Warwick in the changing rooms before the match. The Blues began with a huge first quarter, rattling the Warwick GS and attack early on, and from that point onwards the Blues played with incredible control, confidence and efficiency. Despite this, the Blues still went 8 goals down but, helped along by some huge whole team defence and Mary counting down the number of interceptions needed, the Blues managed to claw it back goal by goal in the final quarter, ultimately winning 50-46 and finally beating Warwick and progressing to the final of the Conference Cup.

Beating Warwick was the perfect final match before Varsity, which was that weekend on Sunday 3rd March. We set off to The Other Place on Saturday along with the Jays and the Swallows to stay the night at a hotel, and then on Sunday morning we arrived at Iffley Road. There was a great atmosphere with loads of supporters from both sides, including many CULNC Alumnae. Despite the O*ford team being in the league above us, the match was tightly contested with O*ford leading by only 2 goals at half-time. In the third quarter, however, O*ford began to pull away and ultimately won the match 47-34. After the match, CULNC headed back to Cambridge for a brilliant squad dinner in Queens’ Old Hall, followed by a classic trip to Sunday Life. It was an incredibly fun weekend — bring on Varsity 2021!

After the excitement of Varsity, we had still had the Conference Cup final to play. On the last Wednesday of Lent Term we travelled to the University of East Anglia, where all the BUCS cup finals were being played. Our opponents were Oxford Brookes, a very tough team who had come top of their league. The match was closely fought but, despite some very enthusiastic if slightly confused support from Cambridge Mens’ Lacrosse, we did not manage to clinch the win and lost by just 5 goals. This was the last match in Cambridge colours for quite a few of the Blues and going out with a medal was a nice way to finish it. The day was of course topped off by the final Wednesday Cindies of term (medals and knee strapping compulsory).

Sadly, the Blues are saying goodbye to quite a few players this year: Carla, our wonderful team vegan, Chloe, our long-limbed Cindies superfan, Laura, our trilingual shooting maestro, Mary, our one-year-wonder, and Sarah (aka the one and only Fodlee), our long-standing Blue who went straight from Lent Term to being a brilliant junior doctor! We wish our leavers all the best and cannot wait for them to come back and visit us! Congratulations to Mary for being awarded a full Blue, and to Carla, Laura, Amber, Tabbie, Fenna, Thea and Millie for being awarded half Blues. It’s been an amazing season and we can’t wait to be back out on court soon!